Spending the Morning in Tulum on Mexico's Yucatan Peninsula

The Descending God, Mayan deity that watches over his City of Dawn, Tulum. 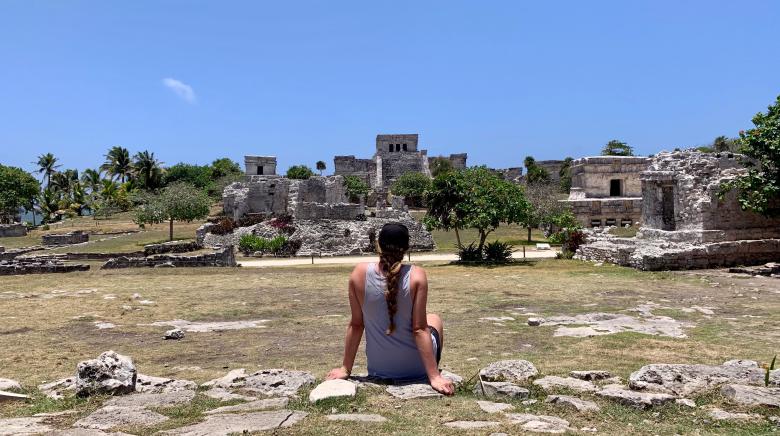 It's tough to be a god, tread where mortals have not trod...

While not Teotihuacan or the legendary El Dorado, the ancient Mayan ruins of Tulum carry a mystery and wonder all their own.

During Mayan times the city was believed to be called Zama, "City of Dawn." Fitting, seeing how the ruins face the sunrise and border the Caribbean Sea. Built for trade, the city gave entry to both land and sea routes, but it was also home to a mysterious god.

There have been many theories about this god, his role in Tulum, and his part in Mayan lives and folklore, but most seem to agree that he is a distinct Mayan god called the Descending God.

He is so named because in all his depictions he is shown upside down, usually holding something in his hands. His likeness is shown in not only Tulum, but also in three other Mayan ruin sites (in Chichen Itza he even has his own temple), and yet, there is still no clear sign of what his role in Mayan life was.

One link historians have found is an association with another Mayan deity called Ah Mu Zen Caab, god of the bees. Bees and honey held an important role in Mayan life, both spiritually and economically, and its god had a strong connection to the major trading city of Tulum. This also connects to the appearance of The Descending God in the other 3 major cities on the Yucatan Peninsula, as all used honey as an important trading tool.

Another link found was a correlation between The Descending God and the planet Venus. Although Venus can now be associated with love and romance (due to its Roman name), in Mayan culture it was strongly associated with war and was meticulously tracked. Astrology in general was very important to Mayan life, with the position of the planets thought to influence worldly events. Their tracking and predictions were eerily accurate (ignoring the whole 2012 phenomenon of course). Thus, times of war were planned around Venus, called "the Great Star" by the Mayans.

Fun Fact! -The use of chocolate or cacao beans for consumption originated in the Americas. The flavor is bitter without additives so the natives drank it as such, or with natural sweeteners - honey being one of the most popular.

A Day in Tulum

Location: Below Cancun, just south (30 minutes) of Playa del Carmen. Tulum is its own small city now, but the ruins are a huge tourist destination so you'll easily find your way.

Tip! - I recommend a guide for those who want to really learn about the ruins and the history of Tulum, not for those who only want a picture for the 'gram.

Parking costs vary and watch out for scammers, they'll usually try to sell a "package deal", which comes with more activities outside of the ruins, but are overpriced and sometimes come with a non-English speaking guide.

After parking you'll either have to walk to the ruins (less than 10 minutes), or take the bus, which runs as 25 pesos per person or slightly more than $1. Honestly, if you're healthy just do the walk, we all need to be more active in life.

Tip! - Mexico is brutally hot during the summer. To be ready, dress for scorching weather and carry water with you.

If you're not with a tour group then you can buy your tickets at the entrance and hire a Tulum "official" guide, with these guides you can be sure of a relatively high level of English.

Tip! - There are no bathrooms in the ruins, you must use it at the entrance.

Then it is only a short walk up to the ruins, which are walled in on three sides and faced with ocean cliffs on the fourth, eastern side. You enter from the north (Watch Tower Temple) and can visit the ruins however you like. A guide will likely take you to the least crowded and most shady spots first to give you historical context about the ruins and the area.

I would divide Tulum into three groups: the first, all the buildings starting from the gate you enter from, then west towards the sea (these include the Great Platform, House of the Cenote, etc). The second, all buildings in the area of the field and terraces (these include Palace 25 down towards Platform 13, with the Temple of Frescos in the middle). The third, the most flashy, famous buildings bordering the cliffs (including the Castillo and the Temple of the Descending God).

My recommendation on getting through the ruins is to not go by group, but instead to mix it up a little. Start in the first group with the Great Platform, go to the large field facing the Temple of Frescos and explore those buildings, then head up to the Castillo and walk around it to the other small temples and ruins, finally curve back around the Castillo to the beach and walk up the wooden steps to Structure 45 and the House of the Cenote, there is a little door you can enter to leave the ruins on one side of the House that most people don't know about.

Tip! -Iguanas and lizards are everywhere and for those who are scared of reptiles (like me), BE ALERT.

The ruins are smaller than people expect, but well spread out over the enclosed area. The most popular areas are seemingly always crowded with people trying to get the perfect picture.

The crowds can be a big turn off for Tulum, so it is important you get there as early as possible!

However, there are some spots that people don't realize are just as beautiful. These are:

The walk back feels infinitely longer than the walk there, but it's still less than a 10 minute walk and you might see curious animals bordering the jungle as you pass by!

As you head towards your car, you'll notice there are many great restaurants and shopping places in the little city of Tulum. Ignore the scammers that rush at you as soon as you leave the path, go to the little shops in the back that sell truly homemade goods and the restaurants that give you authentic cuisine at a crazy cheap price.

Aaaaand relax! Your trip only took you two hours! You can go home, explore the town, or head to the nearby beaches for some lounge time.